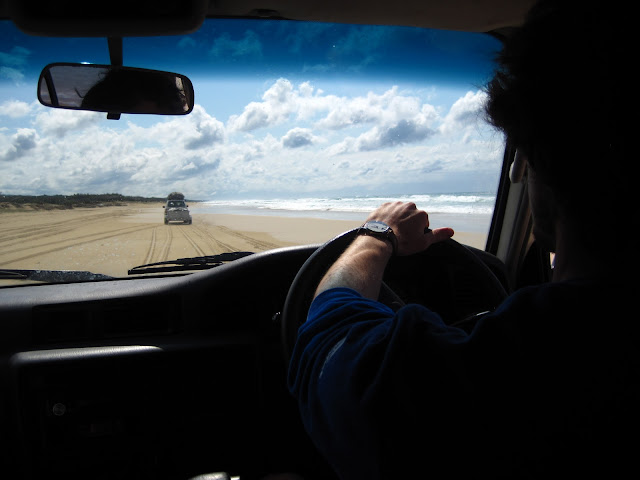 Warning: PICTURE OVERLOAD.  Fraser Island was another place where I took too many photos because its that f*@%ing beautiful. From Rainbow beach we did a self drive tour, which basically involves one lead car (with a tour guide) and then the rest of you following in your own 4 wheel drive. This is the only way to get around the Island.

Over three days we saw:

Going to Fraser was one of  the best choices we made on our road trip.  If you go any where on the east coast, i'd recommend this palce! 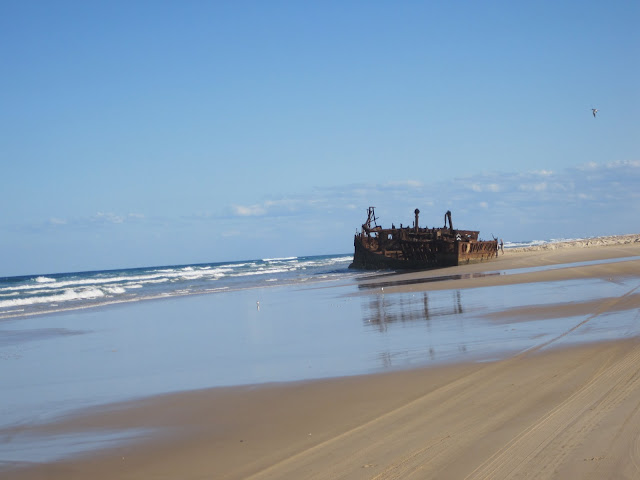 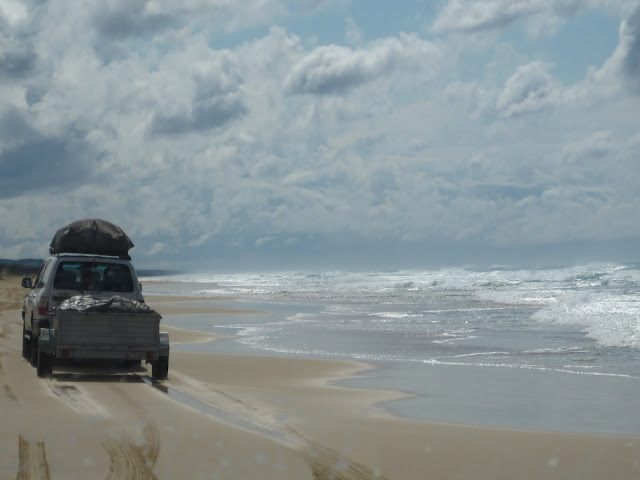 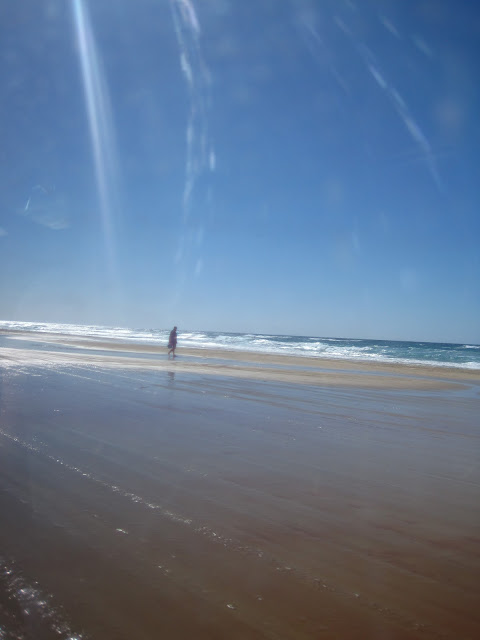 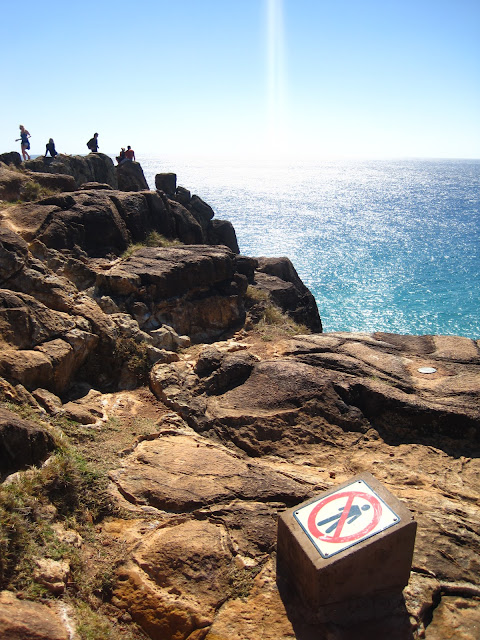 its true, people don't pay attention to the signs.... 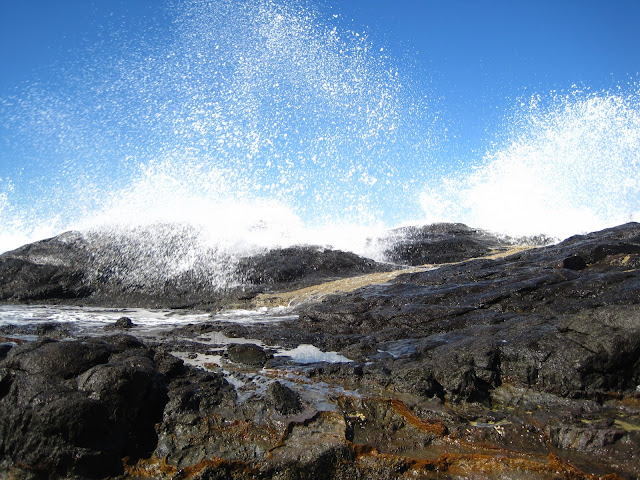 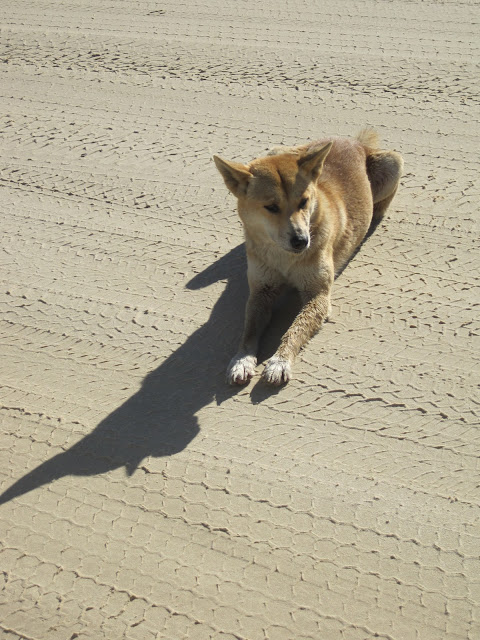 Dingo chilling on the beach 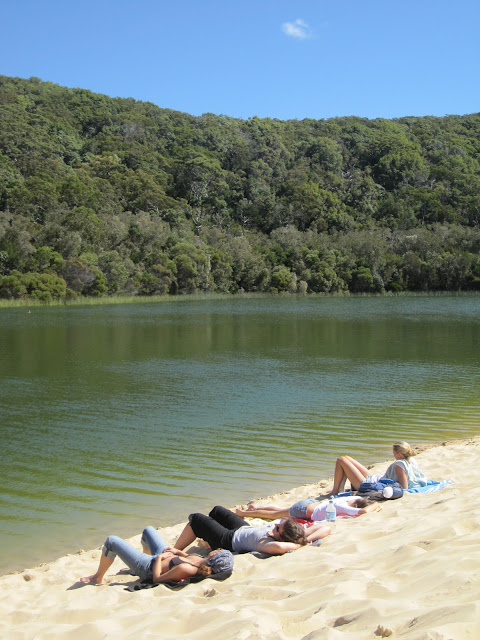 Lake next to the sandunes 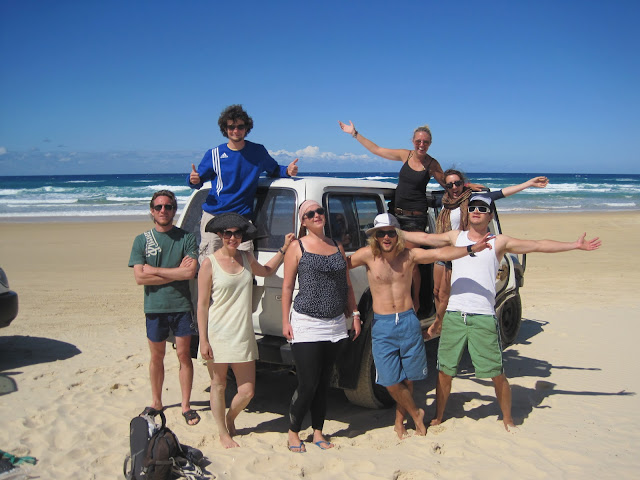 Our Car
Posted by Unknown at 10:05 No comments: 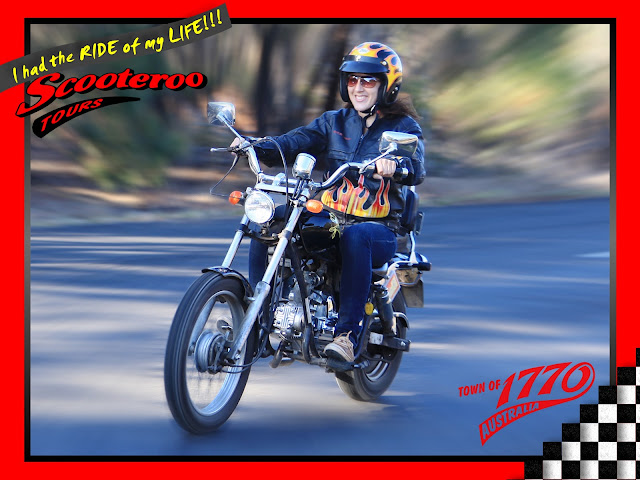 Don't I look cool and bad ass?  Scooter Roo was a happy surprise on our East coast tour.  When we heard about the chopper tours near 1770, we rightly got a little bit excited.  For a few hours we got to ride a chopper, and if you're not singing 'bad to the bone' by the end, there's obviously something wrong with you!
For the bargain price of $55 dollars we got;


This was the first time I'd ridden anything with two wheels and a motor. I had to drive around in a circle quite a few times to get it right.  Stopping was my downfall.  When everyone had mastered the basics, we took to the road.  riding around spotting kangaroos, seeing the town and trying not to crash was one of the funniest experiences I had on my East coast adventure.  At the end of our journey, we stopped off at the beach to watch the sun go down over the water (one of the few places you can do this on the East Coast) and ate hot chips. 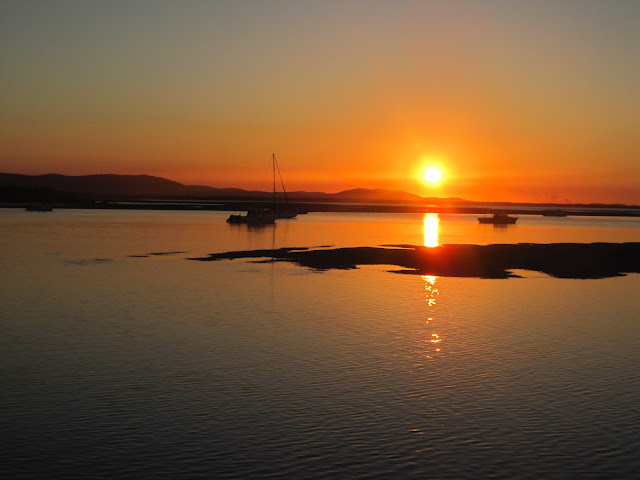 Yes it was very uncool and you look stupid. But you bring a smile to every drivers face (except those in a hurry) and get to be in a motorcycle gang. At least for a few hours.

If paradise had a name...

The Whitsundays - Land of  a thousand islands

Since getting to Oz, this place has been right up there on the hype list.  It seems everyone who had visited it raved about its beauty. and guess what? it definitely lived up to it.

From Airlie beach we took a two night cruise around the islands.  maybe we could of gone on a longer trip, exploring more islands, but seeing the likes of white bay made the trip worth every penny. 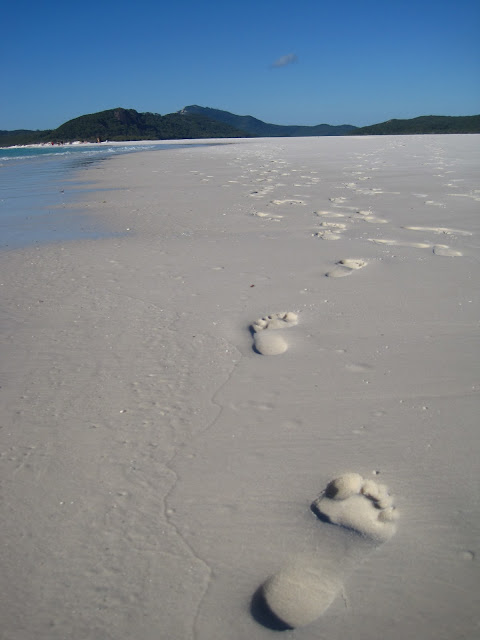 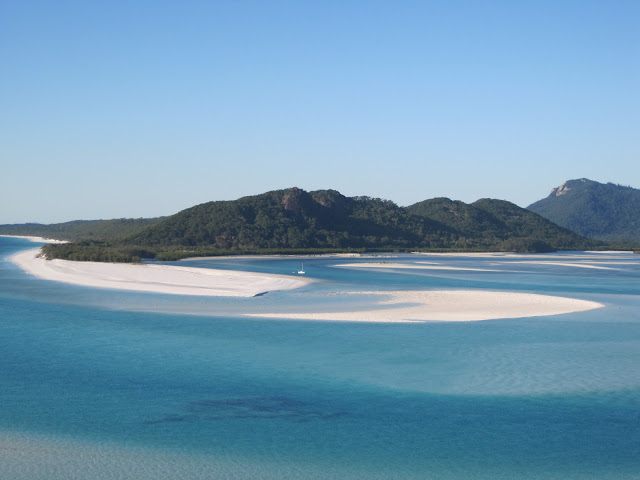 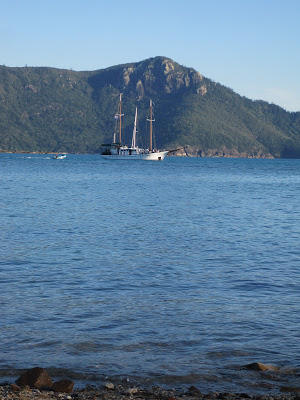 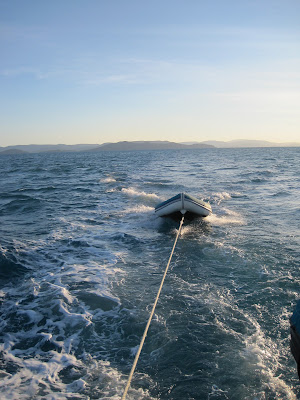 Our home in the Whitsundays and the tender (dingy) for reaching the shore line. 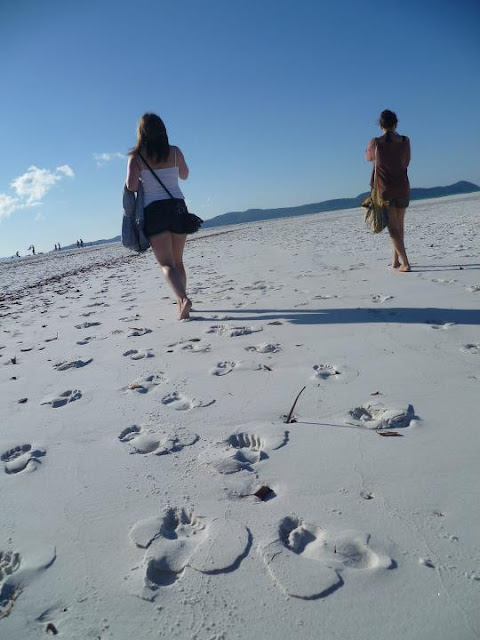 * picture courtesy of the tall-one

And then there was the snorkeling we made me say the phrase "I need an underwater camera!!!!" more than once.

Then after a very quiet time in Airlie beach (off-season = empty streets at night), we left for our next destination: 1770 and the hell raising scooter-roo. 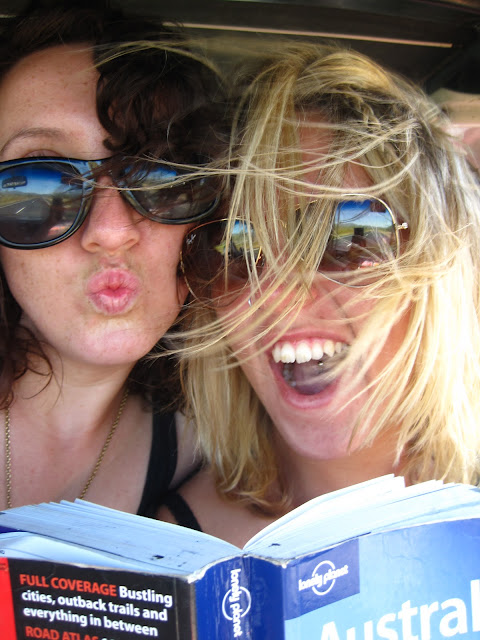 It sounds like the name of a cheesy comic book issue and I was half expecting to find a Tracey island setting. However, there were no rockets coming out of volcanoes or any characters called 'Dr Doom!!.'  Instead, we found a reserve just off Townsville with little beaches and walking trails.

From mission beach we drove to Townsville. As we were only here for one night I can't really comment on the city. However, there was some groovy sculptures over looking the water. 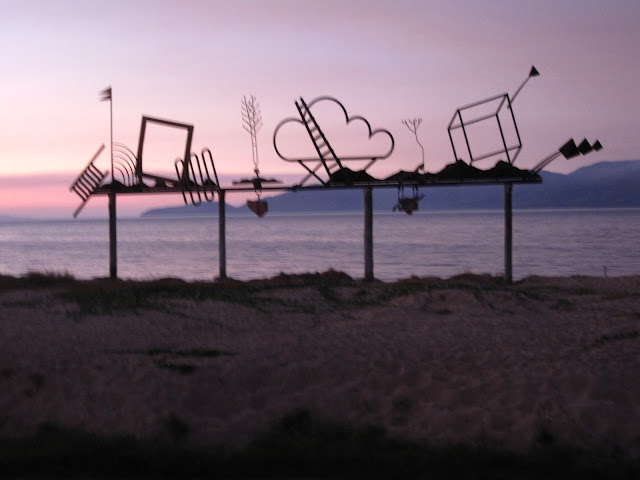 The next day we took the ferry to Magnetic Island, leaving the little princess alone in a car park.  Here we lazed on the beach for a while, had ice creams and watched the world go by. 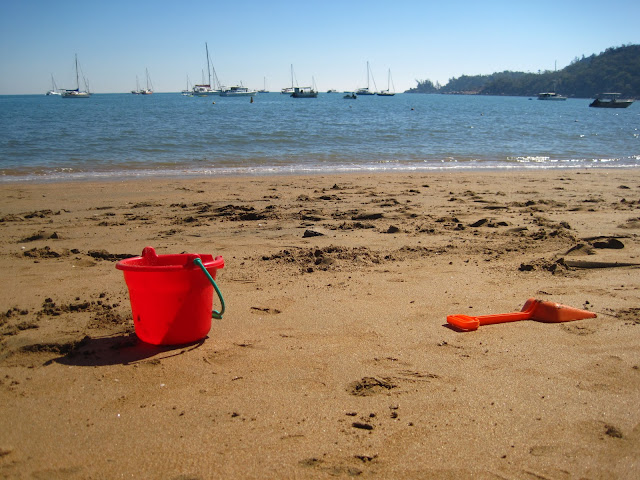 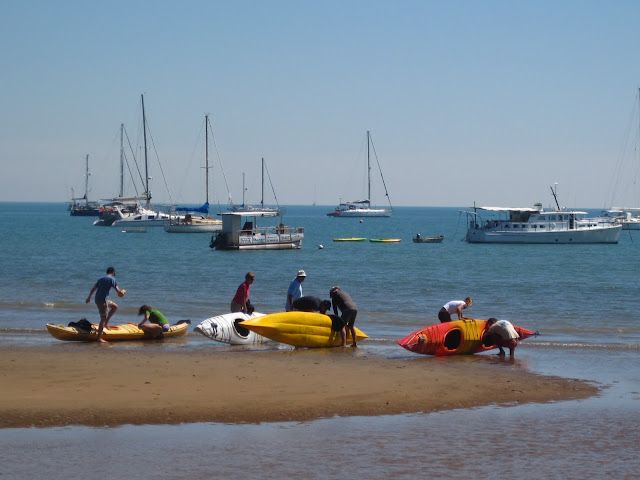 I got a little bit bored; there is only so much lazing in the sun you can do.  Lou and the tall one where pretty happy where they were, so I took to one of the coastal walks to a secluded beach.  Perhaps a steep walk was not a good idea in flip flops, but this is what I found..... 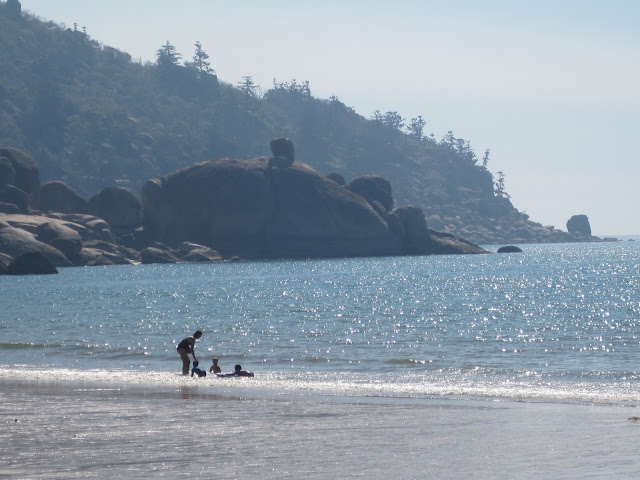 Hardly any people and boulders over looking the surf.