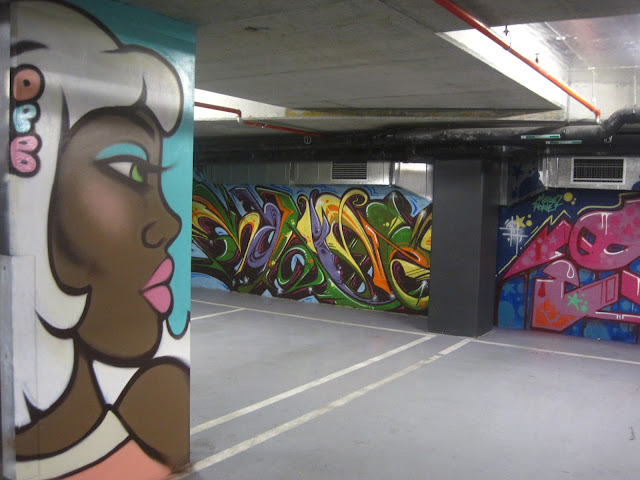 My trip to Melbourne wasn't all take-out food and watching box sets. On my 5th day in the city, Me and a friend went to visit 'Project Melbourne Underground,' a Graffiti exhibition taking up a three storey car park in Emerald House, near South Bank.

Apparently this is the largest private collection of graffiti work in Australia, with the public shown about by one of the artists. However, I ended up walking off and wandering from piece to piece.
One thing I like about the project is that not all the artist used a blank wall as a canvas, some of them incorporating 3d images - a 3d eagle made from plastic being my favourite. I have not included a picture but one day I will make one for my future home. 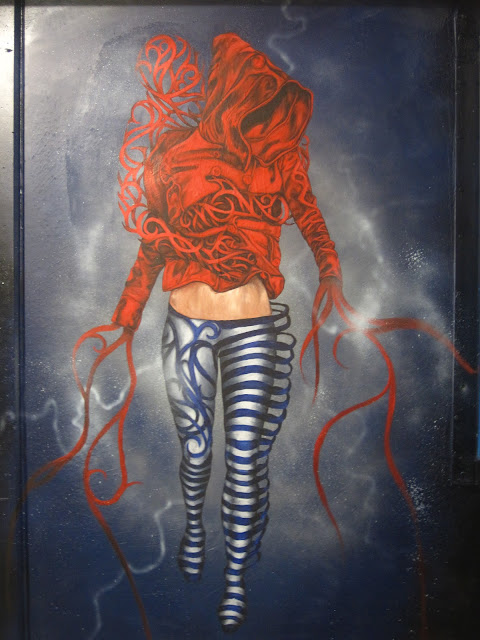 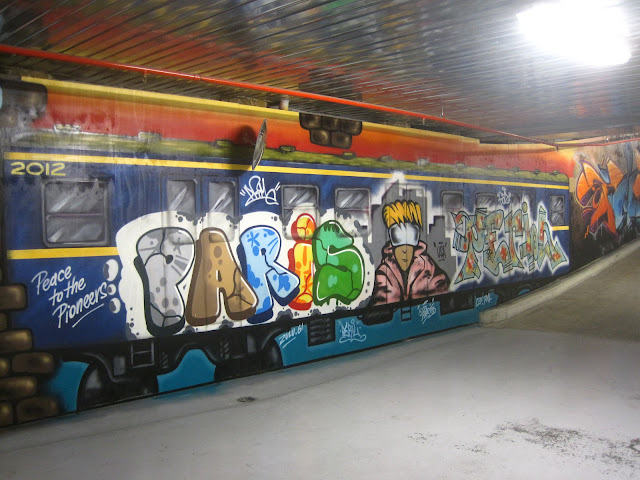 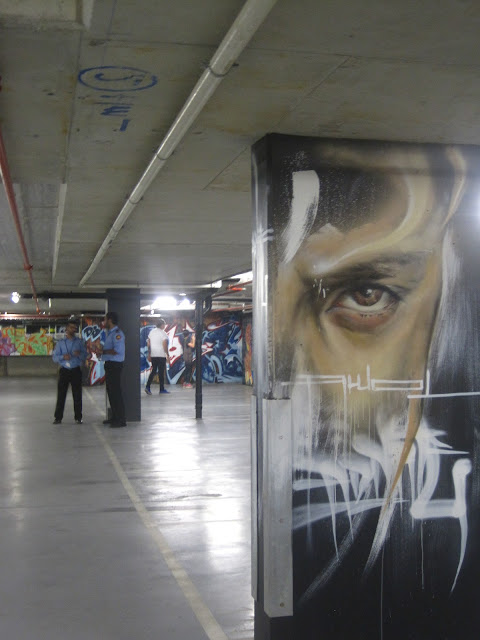 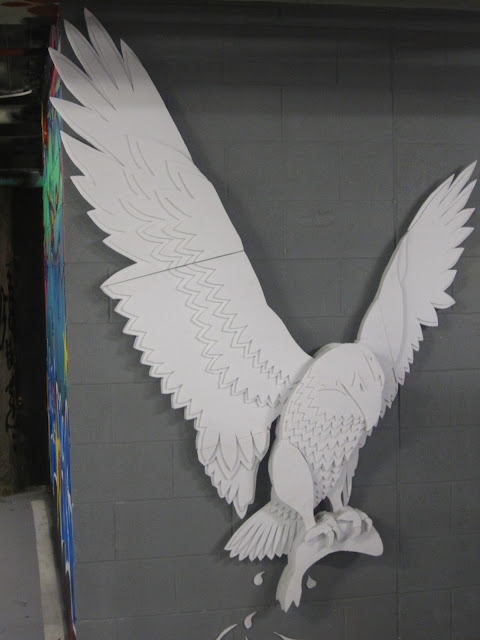 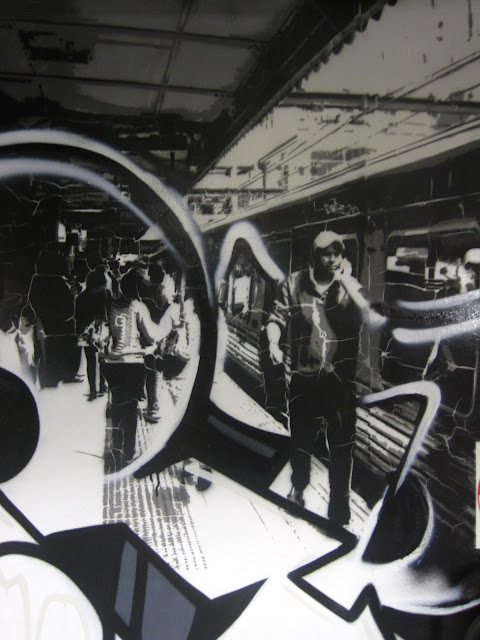 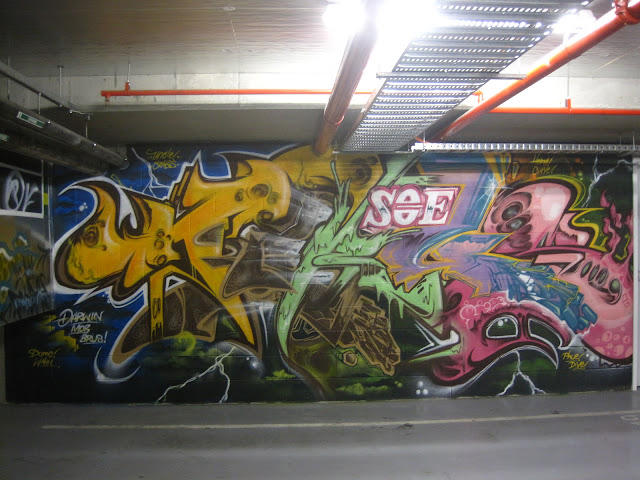 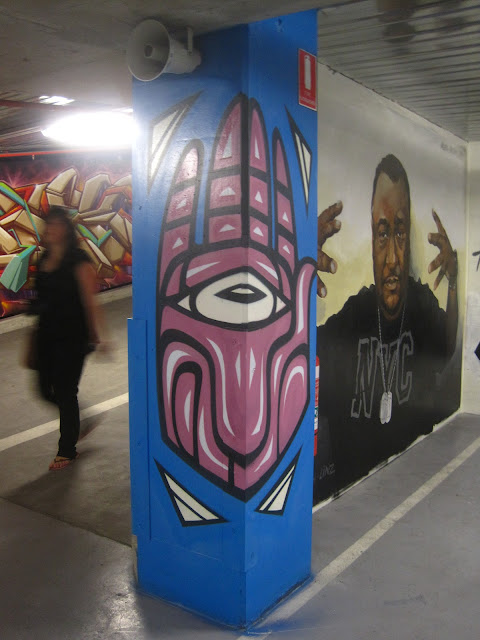 For one week I've been back in Melbourne, one of the best cities in the world!!!!! This was my home for five months and in many ways, it hasn't changed a bit. With the quirky bars hidden down lane ways, the too-cool-for-school cafes and laid back feel, it feels good to be back.  However, last time round I didn't notice so many people wearing black - and its summer.

But in between meeting up with friends, photographing street art and wandering about the city, I had one important activity; Vegging. I've been a potato house guest for 'the Aussie' and her boyfriend.

I am one with the couch. My main companion has been a cat called Yogurt, who doesn't think much of this house guest. Especially since I've stolen her room (including the use of a sponge bob square pants duvet) and bought her the wrong type of cat food.

1.Sleep. Lots of it.
2. Drinking coffee and tea. Sometimes at the same time.
3. Eating Pizza, Pad Thai noodles, Sushi and Indian take aways.
4. Reading Patti Smith's 'Just Kids.'
5. Watching enough TV to last me six months. Episodes of Angel and the inbetweeners have been preferred.
6. Getting lost on wikipedia and you tube. And there's also the old habit of making collages on Polyvore. This is reminding me exactly why I need to travel and live places where Internet connection is limited, I have no self control.
7. Having baths. God, I've missed them.

Tomorrow I return to Sydney and the ship.  Once again Melbourne has given me exactly what I needed and I go back well rested and stronger.  After vegging out on a massive scale, work on Wednesday will definitely be a shock!!!!
Posted by Unknown at 23:37 No comments: 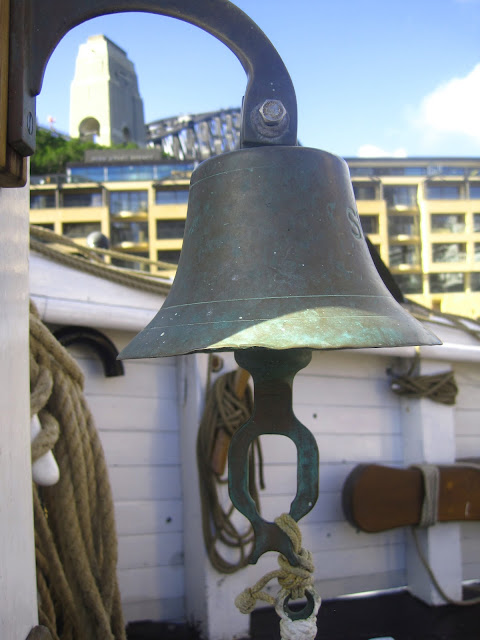 As I sit on a comfy couch, with a wifi connection and day time TV on full blast (that's right people I've escaped the ship for one week!), I've been reflecting on my experience on the Southern Swan. In my previous post  Learning to sail, I discussed the work side of my life, but living aboard is also a dominate part of this new world.


Within in the crew, the vast majority live aboard on either the Southern Swan, or the Soren Larsen. For the moment, the southern swan is my home. When I first started I was sharing a room with three people. Now I share with one; my partner Zim. My Cabin, in all honesty, is not the prettiest. In fact its the only room not to have been updated it last years' refit. Its dark. There's one little skylight and unless we're connected  to shore power, turning on the light is impossible.  And it's very hot, especially when the engine's been on and off all day (for the day cruises they motor upwind before setting the sails) .  I have never loved torches so much in my life and will eternally be grateful for my fan!

However, what we do have is a double bunk. A real sized double. And its comfy as, well a normal bed, but it makes waking up some mornings really hard!  Its also clean and as cabins are build for sleeping and not much else, I can't complain. 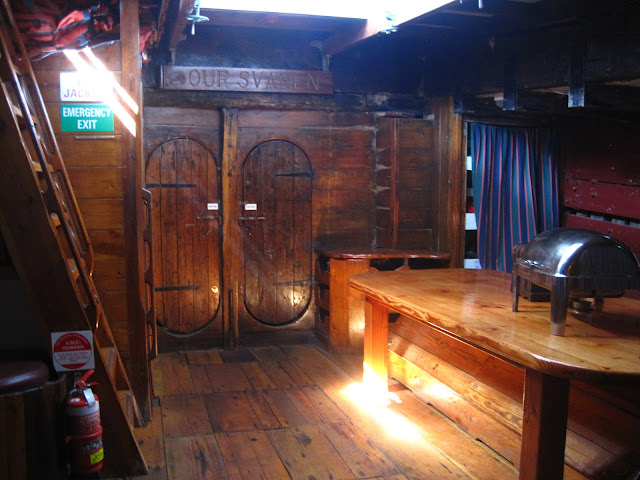 
When I first started, the ship was over on a customs wharf near Balmain.  Then the Soren Larsen came along and needed a home. So the Swan moved to a new location. A timber wharf in Campbell's cove. And wow, what a view.  Its a private wharf, but sometimes we have to politely remind member of the public. 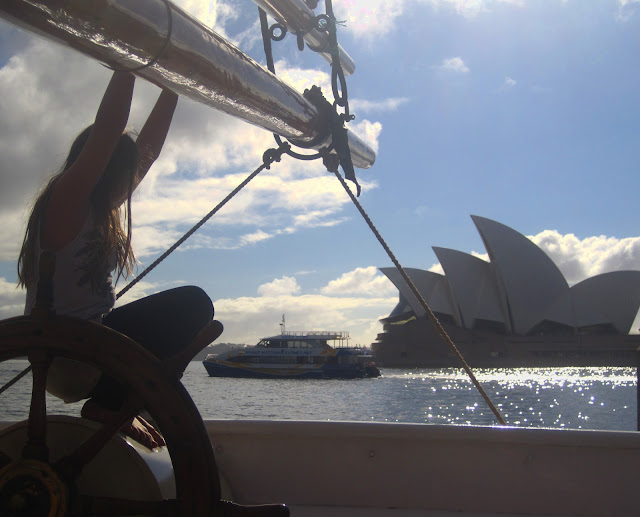 being in this location, means the rocks, one of my favourite areas of Sydney, is literally on our door step.  Sometimes, if the morning start isn't too early, I pop to my fave coffee shop for a take away cappuccino.


We used to take turns cooking and washing up in the evening, however for a while things got a little crazy, disorganised and if it wasn't due to certain people, I would of gone very hungry. By January order was restored and those aboard the swan were up for cooking. Its been interesting nearly poisoning a friend with pesto (who knew it contained nuts) and learning yummy vegetarian dishes.    So on the swan everyone takes a turn cooking from our staples and anything special we've picked up. 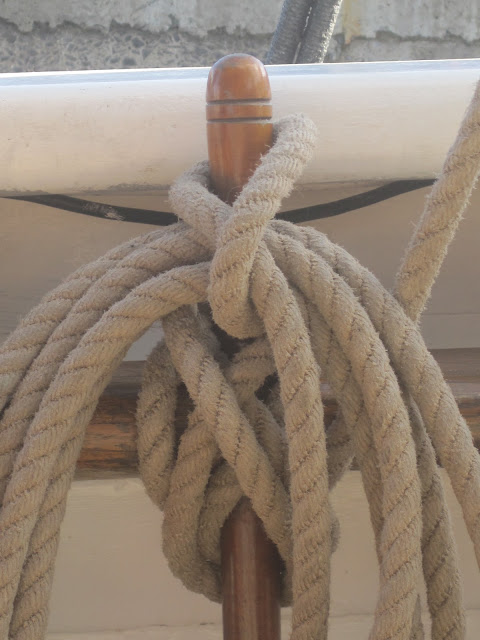 
As part of the daily routine, it cleaned everyday, which is a plus! There's a shower with a power head, which is awesome. However, no matter how much i scrub, my finger nails stay dirty and the dirt is en grained in my feet. All my shoes have been ruined from working on the ship, so I spend a lot of time barefoot.


But the main thing that makes living aboard worth it are the crew.  On the whole, I feel I've been lucky these 6 months. On the Southern Swan not only has everyone worked well together, but we've had some fun times, spending a lot of our free time together.  Sitting and talking about, well,  not a lot, out on deck has given me some great memories.  And on the rare occasions when you get the ship to yourself, it can be pretty amazing  spending time with this old girl. 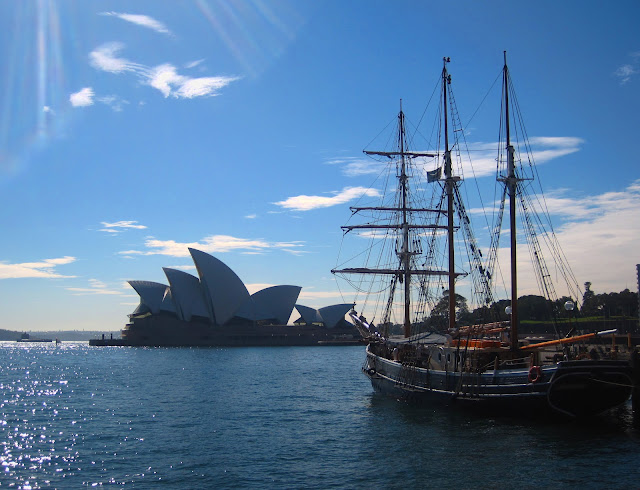 Out and about in Sydney: The Bondi to Coogee walk 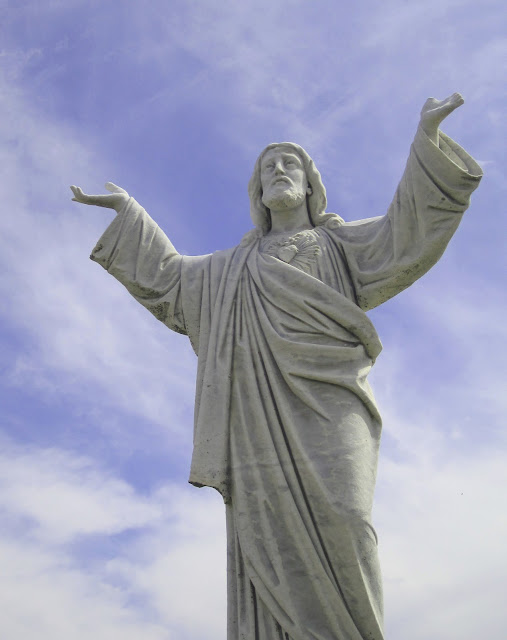 Way back in October, me and Zim walked the coastal route between Bondi and Coogee beach.  Along the 4km stretch we found the beaches of Clovella and Bronte, saw a pod of dolphins, rated the water side homes and walked across a massive graveyard. I found myself fascinated with the catholic graves, many of them the resting place of Navy men and their families. 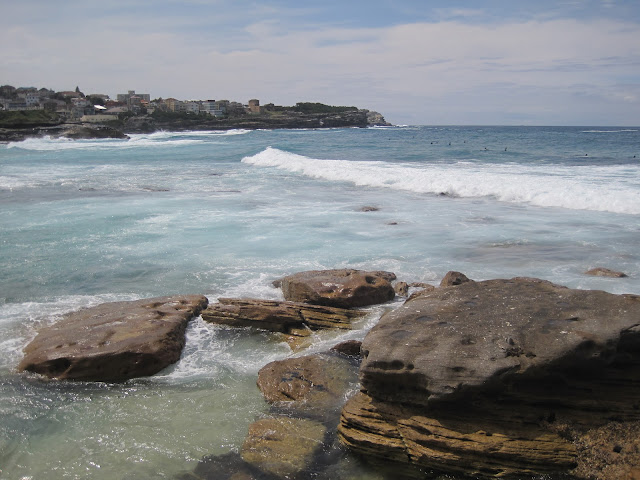 After food and a nap on Coogee beach, for some bizarre reason we did it all over again!!!! I think part of it was because we didn't know the buses in Coogee. 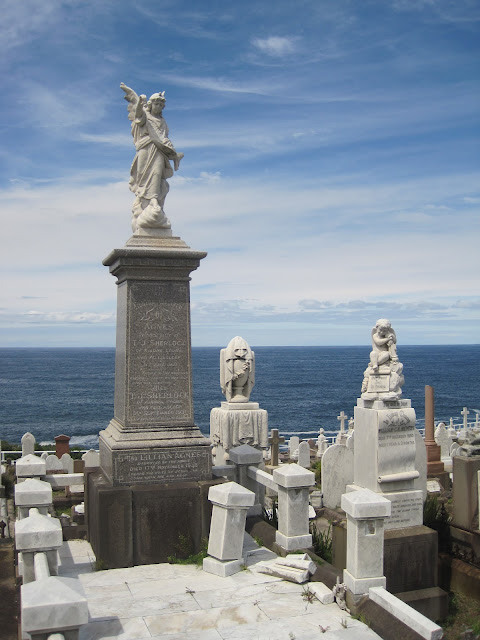 Although the weather was cool and the wind was blowing, this is definitely a great way to see Sydney outside of the heads.  A definite must while in Sydney. 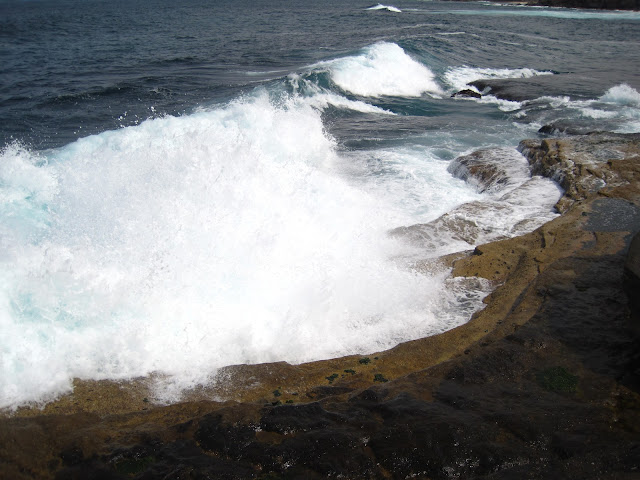 On the Wishlist: Surry Hills 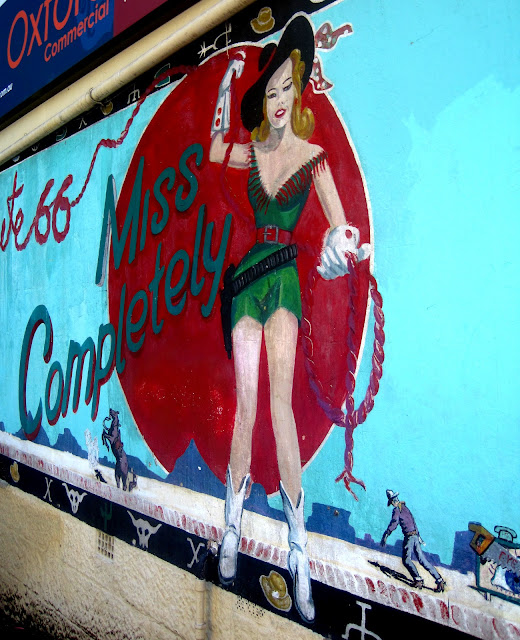 A few weeks ago me and the tall one visited Surry Hills, number two of my Sydney wish list.  It didn't really live up to expectations.  It was a far walk from central and i wasn't really sure when we arrived. Definitely would not refer to this district as a village (as some tourist brochures have). However, we did go into a few cute shops, have coffee and then head to coco cabana's for pizza and a daiquiri . There was also some awesome artwork on the walls (see above). 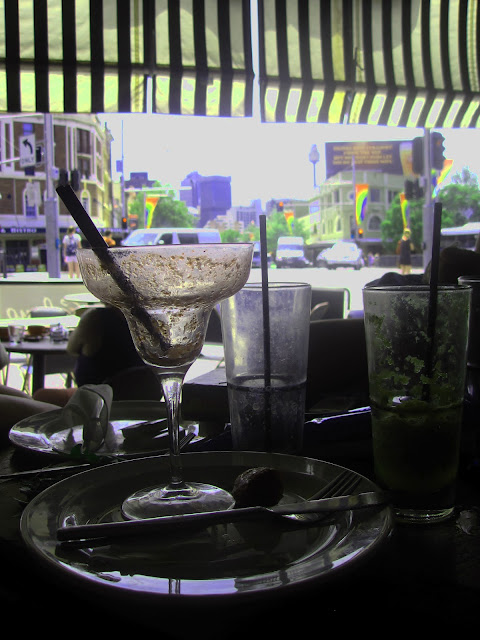 Happy I got to see the place, but next time I'll wait for a reason to come this way.
Posted by Unknown at 18:06 No comments: