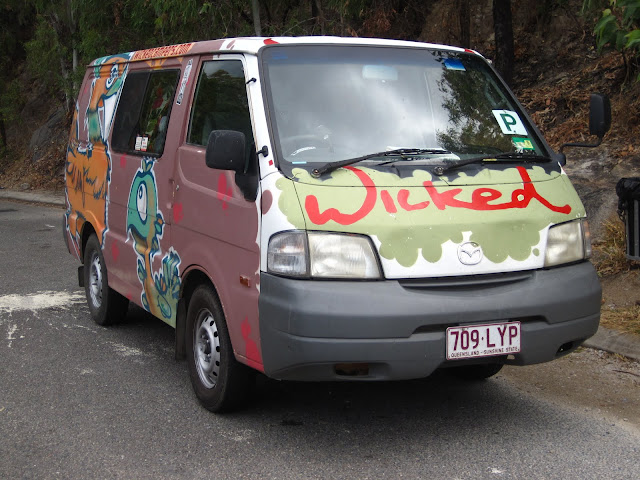 If there was one thing I wanted  from our wicked camper, it was not to have the word 'pussy' on the side. But the universe had other ideas. After checking out of Gilligan's hostel, I found the sentence 'Save a bird, eat a pussy' written on the side of our new home. To anyone who hasn't seen a wicked camper before, each vehicle is has its own individual graffiti  art on the side. One thing was for sure, We'd be getting a lot of attention on this road trip, which started about 10 seconds after we left the depot ("Hey girls! I want to see what I'll be eating" - lovely). 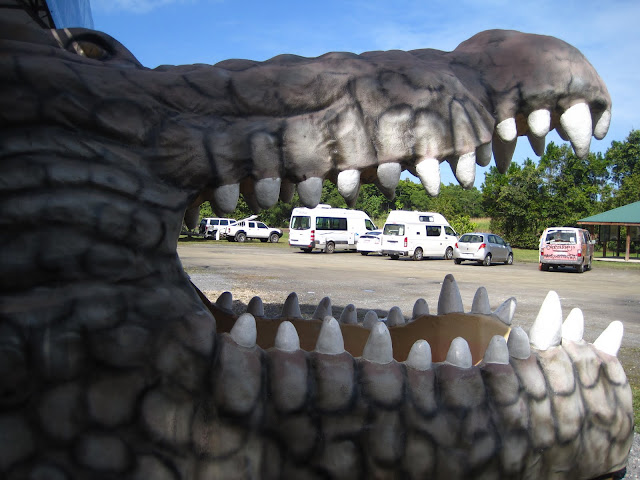 After loading up, signing bits of paper and paying the people of wicked, we decided to take our 'little princess' (the name of the camper on all the official documents) up north from Cairns for a night to test the waters. Our van was no longer a spring chicken and we thought it best to try her out before we were too far from the depot. This turned out to be a good idea - our boot wouldn't lock and our gas stove was buggered.

As I'd been driving land cruisers about for the last few months, it was pretty easy driving the old girl.  Power steering? pfff! who needs that - work those muscles! All of us were in good spirits, finally doing the road trip we'd talked about for months. 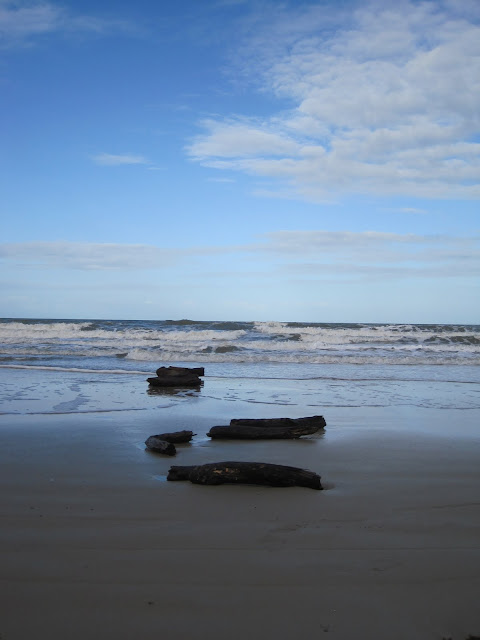 We almost went to Cape tribulation but then realised we needed a ferry. You can tell planning and research weren't high on our agenda, a mixture of laziness and just not being that bothered. I mean, we had a camper to play with, who needs rain forest? In the end we settled on Port Douglas, a sea side town famous for its four mile beach, which looked stunning, even on an over caste day. I could tell PD was a good place, but I was glad we were hanging around for only a few hours; except for looking a boats in the harbor, complimenting the beach on its serenity and peering in shops I couldn't afford, I wasn't sure what to do with myself.i

We then camped along the coast-line road for the night, settling into our nomadic life as the waves sang us to sleep. Whether it was the sound of the ocean, the heavy night before  (note to all: Gilligan's is a party hostel and should be treated as such) or just knackered from the diving, I slept like a baby. 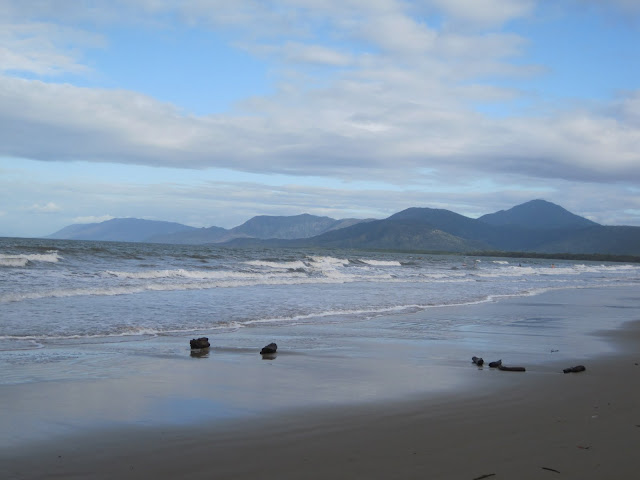 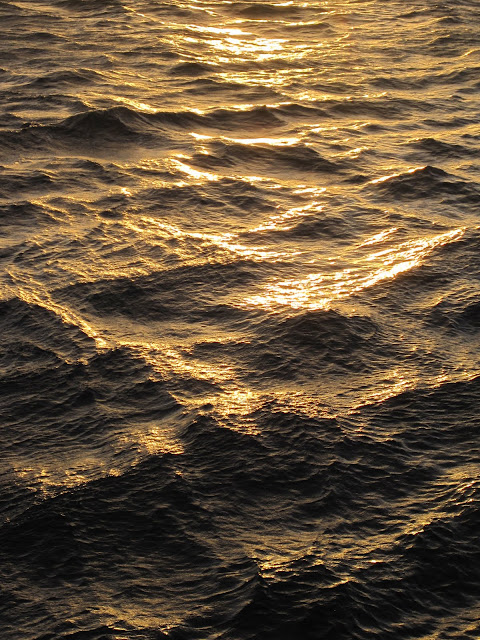 Doing this had been on my list* since....well somewhere near the dawn of time.  Apparently more is known about the moon's surface than our oceans, and to me, that sounds like a challenge. So where would be more perfect to learn to dive than the great barrier reef?

Me and my two travel buddies signed up with Pro Dive for a five day course to get our open water diving certificate.  It started with a class room and the theory behind diving.  Then it moved to the pool.  This is where I hit my first hurdle, well second if we count my Buddie turning off my oxygen.  But maybe I should give you some background to explain.  Before a couple of years ago my swimming abilities were a little 'limited' to say the least. Technically I could swim, but I wouldn't stick my head in the water. I corrected this a few years ago by enrolling in swimming lessons however, I always kept a weird dislike to blowing out my nose under water. Unfortunately for me, this was a necessity to the course. As I would learn later, some masks have a habit of letting water in then and you need to clear it by blowing through the nose. Let me tell ya, I did not get any cool kid marks for how long it took me to get that right.

So two days pool and theory, taking a test that you didn't need to pass and looking hot in flippers was followed by three days and two nights out on a boat.  The ride out to the outer reef was a little bumpy and made me glad I took some sea sickness tablets.  Then it calmed down when we got to our destination.  This was where the fun began and it all started to make sense.  For the first dive I was a little nervous.  I touched my first pineapple sea cucumber, which was a little freaky and saw a trillion fish on the coral.  For the next four dives it was all skills and except for a little disorientation when descending without a line, all was a OK.  After dive four I became a certified diver. 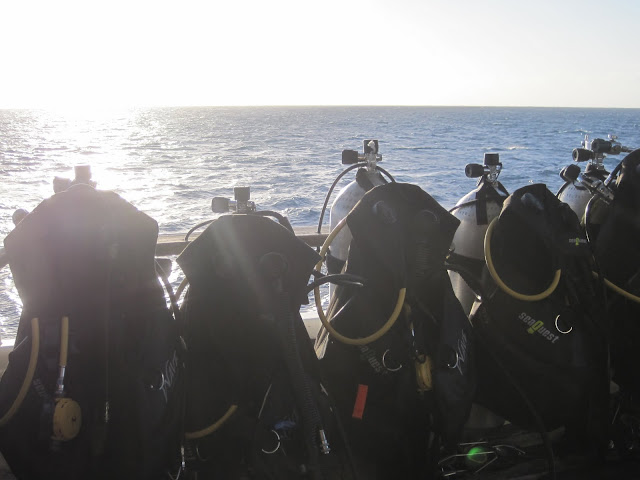 We then had five pleasure dives. The first; saw my first turtle, which I got pretty excited about.  The Second; a night dive, which I was bricking it for, because night is when the reef sharks come out to play. And just before a night dive is when the instructors decide to take the piss out of you.  It turns out the best way to get the adrenaline flowing is for them to make up stories about the sharks attacking and a giant sea eel. Thanks guys.
So I went into the water, leaving a note to my family saying I loved them very much and my possessions should go to homeless monks in Surrey (I'm sure they are there) after I was eaten my a couple of big fish.  It was bizarre at night, the sea bed even more alien than in sunlight.  But the sharks were the greatest thing I've seen in a long time.  They were circling us for a while and even begun 'interacting' with our instructor, i.e going for him. Still we all got back to the surface with our limbs intact, which was a job well down.

The next three dives were filled up with 'massive fish' as I've written in my dive log, not paying enough attention to my depth measurement** and my mask leaking a lot.  By the end I was an expert in getting water out of that damn mask!

For three days my life consisted of diving, eating some excellent food and sleep.  This was one of the biggest expenses on my east coast adventure, but it was worth every penny and the subsequent land sickness, and even the temporary loss of hearing.

But then it was back to land, a night staying at Gilligan's before picking up our camper and starting the road trip...

* Yes, I have a list of things I wish to accomplish in my life.  All the cool kids have lists...
** After my hearing didn't return after a week, I went to the doctor to find out I had barrow trauma.  It took one month for my hearing to return to normal. Learn from my stupidity and always take a note of your depth. Don't just follow the pretty fish. 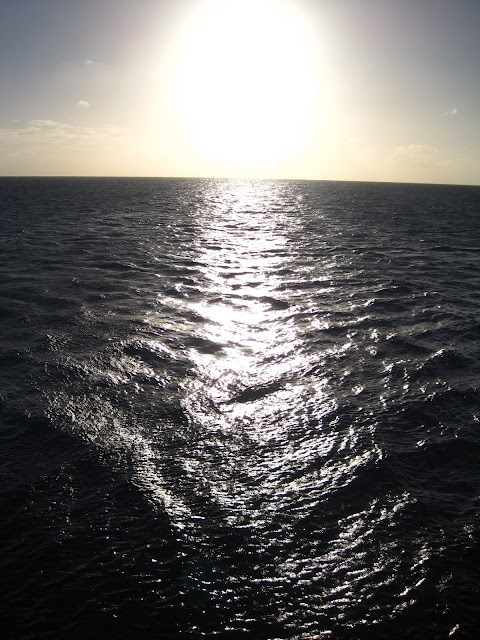 Cairns, I think I love you 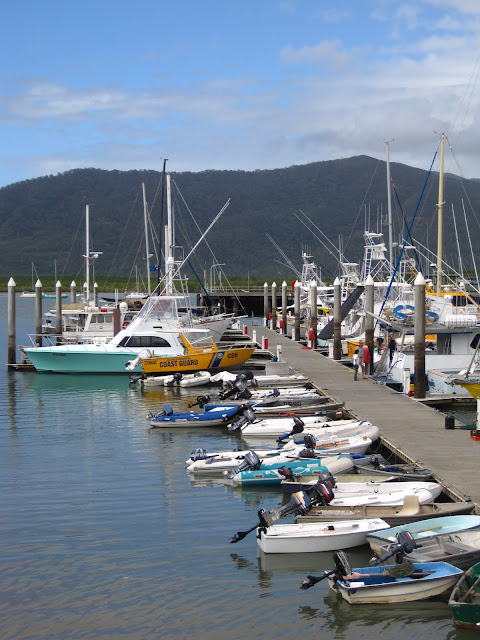 As soon as I landed in Cairns, I had a good feeling about this place.  By the time I collected my bags and got my courtesy pick-up to my hostel, I still had the majority of the day to explore.  The first of my road trip companions, Lou, was flying in that evening, so I had some time to kill. Cairns was one of those towns that embraced its holiday destination status; people strolled down the streets, shop staff were courteous without being overbearing and the weather was sunny.
After four months in the outback, I did indulge in a bit of shopping and then spent some time at the waterfront.  As this was salt croc and jellyfish country, the sea was a no-go area. However the man made lagoon was a good enough substitute for me. 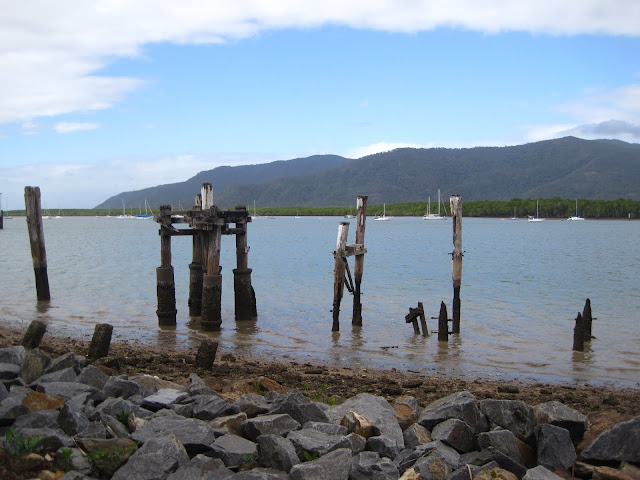 The next day, it was time to pick up the final member for the road trip. In the morning Me and Lou headed out of the town to Mount n' Ride, a horse trekking company situated in the rain forest.  The tall one had been working here as a horse riding instructor and it was time for me to get back on a horse!  Having a trot on my horse for the day, Xena, was a highlight to the rain forest trek and thank you Mount n' ride for the experience.

Back into Cairns and the trio was complete. For a couple of days we stayed in a motel room at the rainbow inn.  It was a bit of a walk out of town but we got a good price for a private room. We spent our days sunbathing at the lagoon, eating good food, taking part in free zumba lessons (which was so much fun) and then our evenings at Gilligan's.

I didn't really take that many great  photos during this time, but I really liked these two at the marina.

And on Monday, the diving commenced....

The way to Cairns 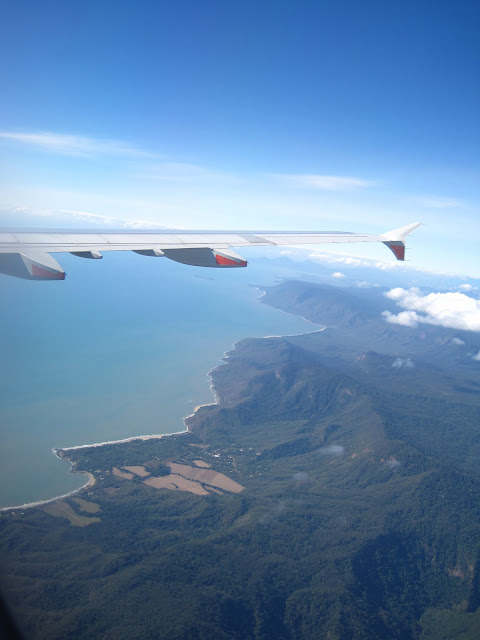 Sometimes public transport really isn't pretty. No matter if its a bus ride, flight or train journey, at least one hygiene rule is broken by a fellow passenger. From Katherine to Cairns a greyhound, two shuttle buses and a flight made up my journey.  It was the greyhound from Katherine to Darwin that won the grossest moment.  Everything was going pretty well; a spare seat beside me, no screaming children hitting my head rest, a usable toilet, no 'characters' mumbling to themselves whilst wearing a bucket for a hat. So far, so good.
It was only when my attention was drawn to the family in front of me (a mother and two children) that things got weird.  At first I thought the older child was stroking the younger ones head as a sign of affection, but then the mother joined in and it finally dawned on my what was happening. I was watching a delousing session on a greyhound bus. Looking closer I could see the eggs to both of the children's hair and my head began to itch.  Suffice to say I kept my head well away for the remainder of the journey.

From them on things were on the up.  I stayed one night in the poshest dormitory at the Darwin Airport Inn, which I had all to myself.  Fluffy towels, T.V, power shower, the works.  Sure it was more expensive than I am used to at $69 a night, but it was worth knowing the airport was a short walk away. Then I was up at stupid o'clock for my flight.  Granted, there was some delays on departing, but that did mean there was daylight all the way to Queensland. Watching the landscape change from barren yellow to lush rain forest was just amazing. 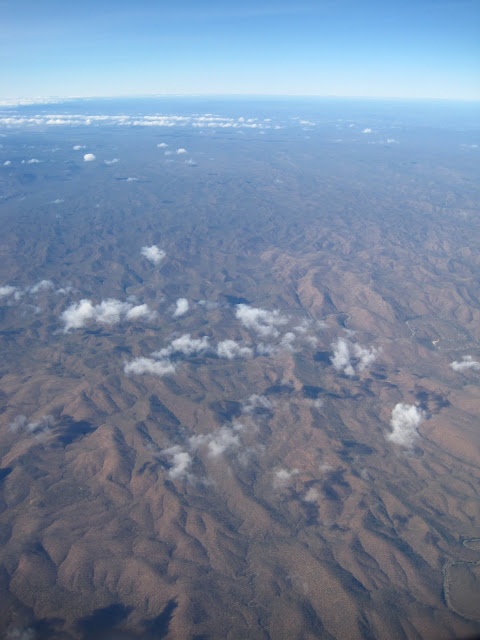 This was the view that greeted me as we touched down into Cairns.... 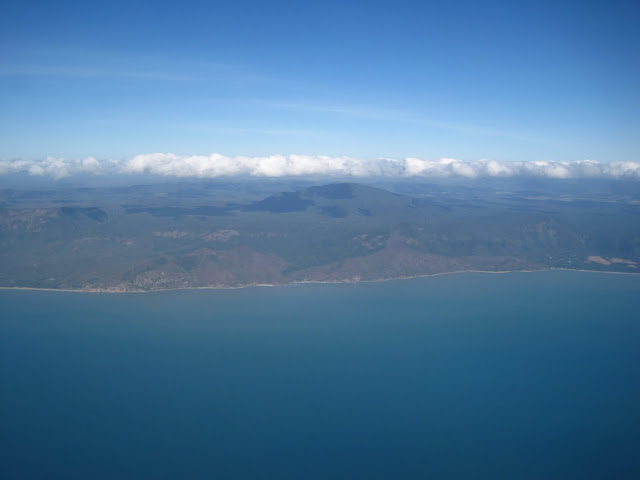 It made me hum the Jurassic park theme all the way down.  And something told me that Cairns was somewhere I wanted to spend a little time.
Posted by Unknown at 10:23 1 comment: 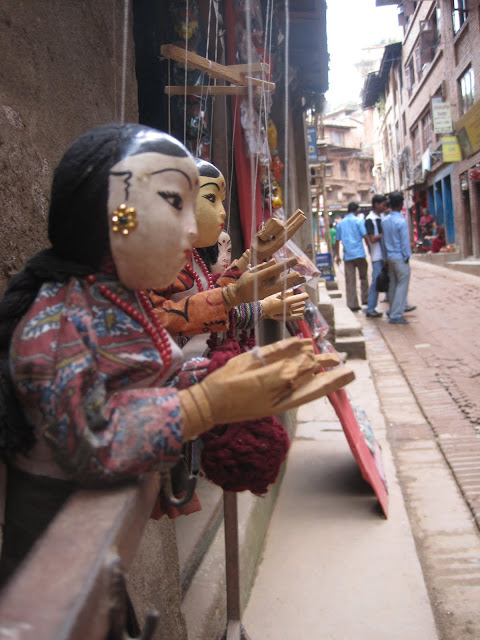 After India, I crossed over the border to Nepal with a fantastic travel companion.  Nepal, except for the scariest bus ride of my life, was fun and extremely traveller friendly. Over the next few weeks I bungee jumped, attended a local wedding, sampled Katmandu's night life and visited numerous temples.  One day I will return to conquer Everest but I was pretty happy with my Nepali adventure.  Even if monsoon season was looming. 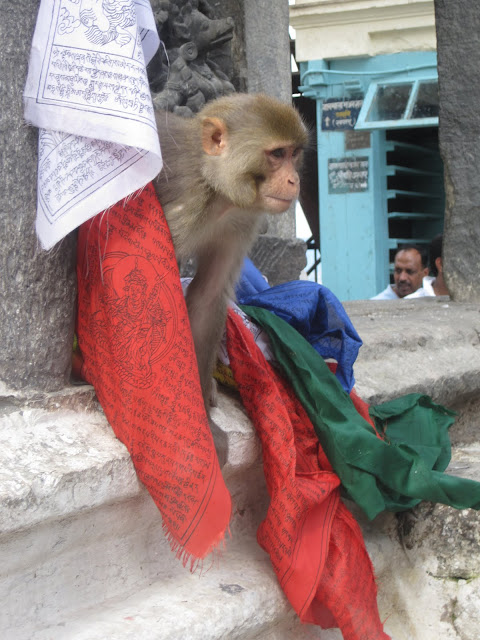 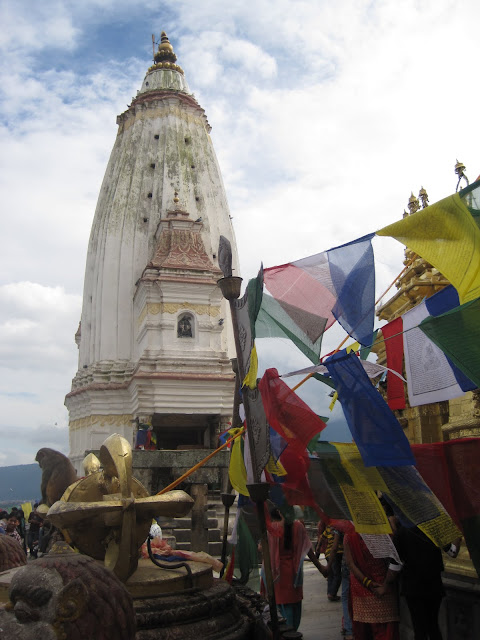 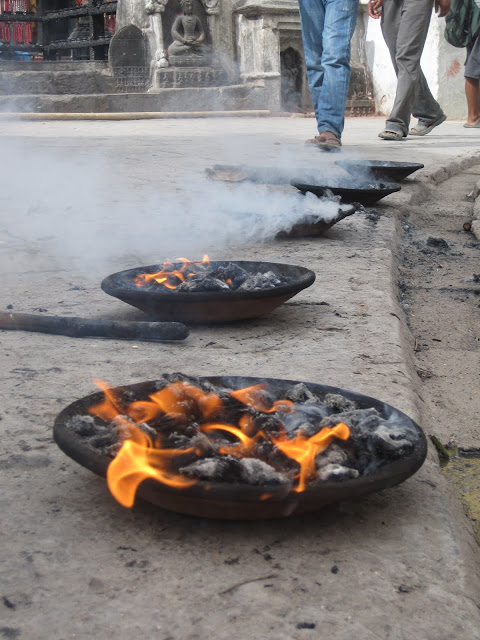 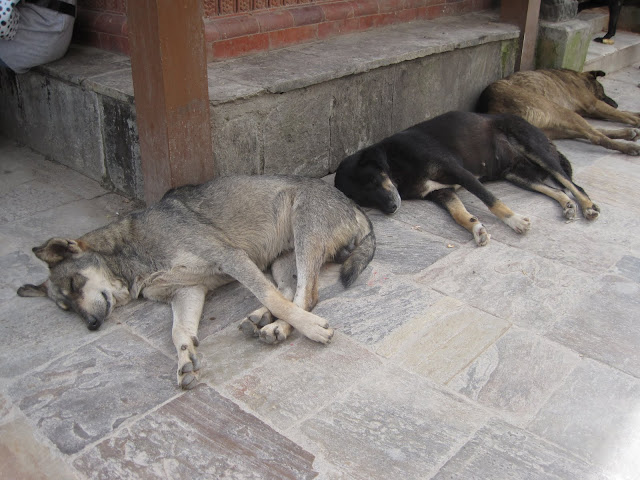 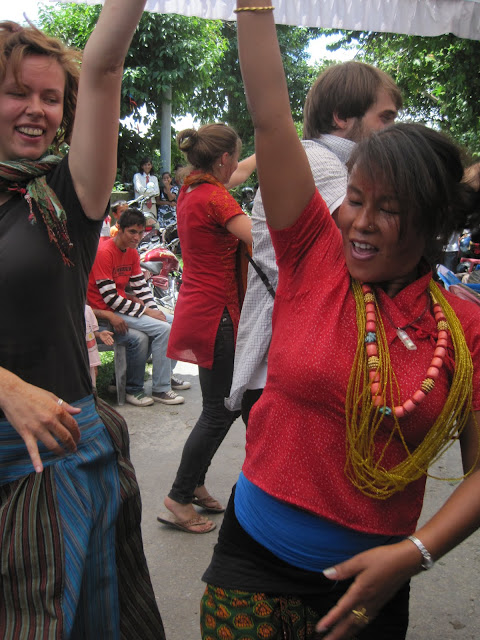 Traditional Nepali dancers for the wedding. 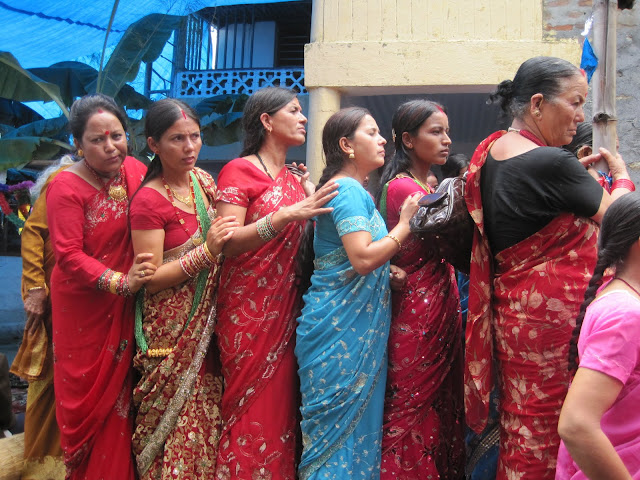 Guests at a wedding try to take a look at the groom arriving. 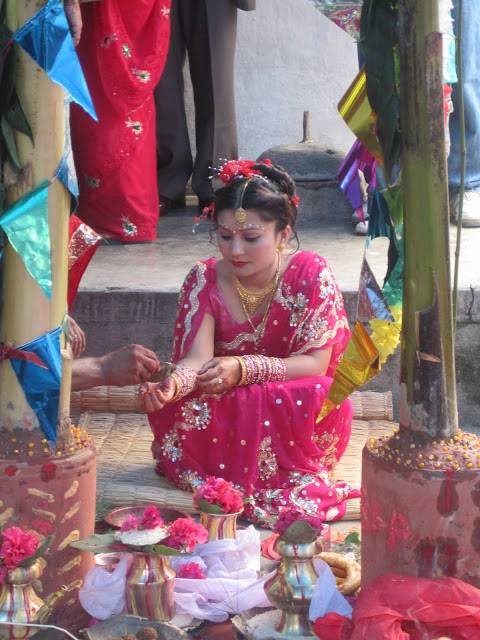 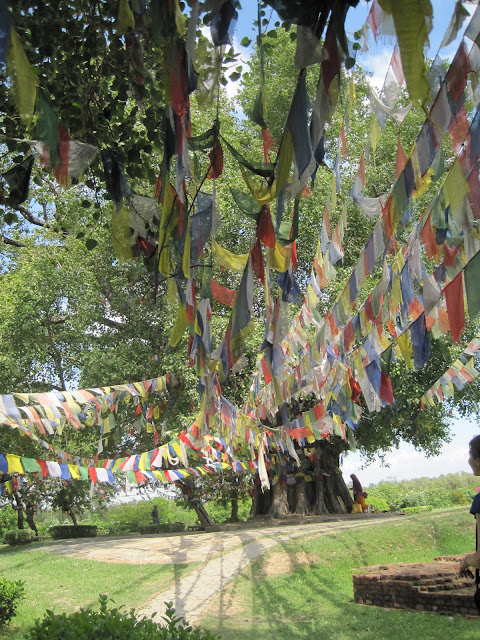 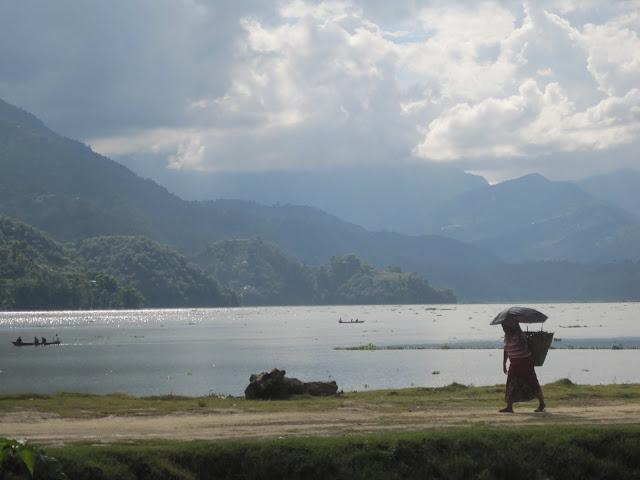 Pokhara. For a few brief moments on our first day we saw the mountains looming, before the clouds disended. I still loved this lake. One of my favourite times was rowing out on this with two friends.